The mechanism that feeds the filament into the extruder basically consists of a stepper motor that through a gear turns a knurled bolt.  Th filament is pressed against the the knurled bolt and as the bolt turns the filament is forced into the Bowden tube.  Although it works and many users do not have a problem I and many others have said many bad words about it.  A search on user-groups and Thingiverse will show up multiple fixes and replacements for the drive.  After analyzing the problems I came up with a good improvement that is easy to implement and the printer can even make the improved parts by itself.  There are basically three problems:

1:  The knurled drive bolt is marginal.  Ultimaker recently upgraded it from V2 to V3 but I like to see an even better bolt with “proper” teeth cut instead of using a knurling tool.

2:  The filament is pressed against the bolt by a stationary piece of plastic.  Although it is made from Delrin there is unnecessary friction since the force pressing the filament is rather large.

3:  The position of the pressing plastic is fixed so there is drastic variation in the pressing force for slight dimensional changes of the filament. 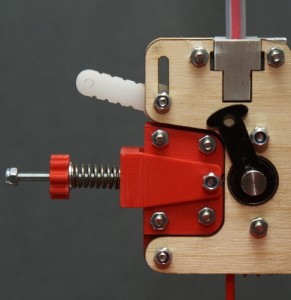 The solution that I came up with addresses the last two items and it makes a drastic improvement.  Here is a link to the details:

I also placed all the files on Thingiverse to make it easy for others to duplicate it:

One thought on “Extruder Drive Upgrade”