Mojo Printer
A while ago there were discussions trying to understand the new Mojo FDM printer from Stratasys so it was one of my first stops.  http://www.mojo3dprinting.com/

Following the usual trend, “low-cost” printer and custom ink, this model has taken it a step further:  A cartridge filament system interlocked with a throw-away print head.  The design makes it convenient though, just drop in a cartridge and snap a head in place and go. 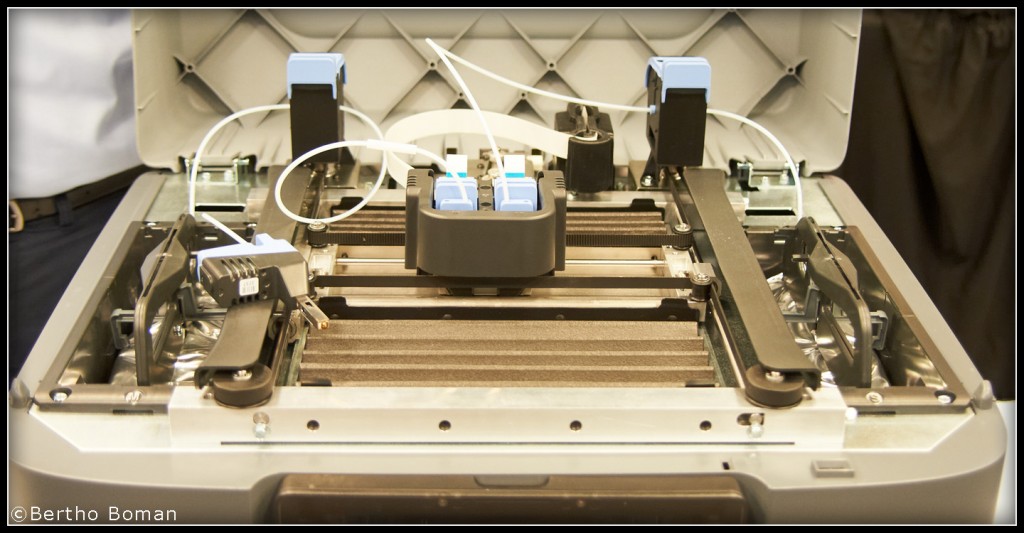 As can be seen in the first picture, there is a filament cartridge on each side and two blue print heads in the center.  There is a sample head the left side.  The heads just snap in place like loading an inkjet cartridge.

The strange black boxes  at the rear corners triggered several questions in previous discussions.  They are simple mechanical retainers to keep the feeder tubes in place.  There is a little blue ring on the tubes that snaps in place and it just locks it in position.  I asked the design engineer and I was told it is a prototype and they will simplify it.  The whole top of the machine is actually a 3D print for the prototype. 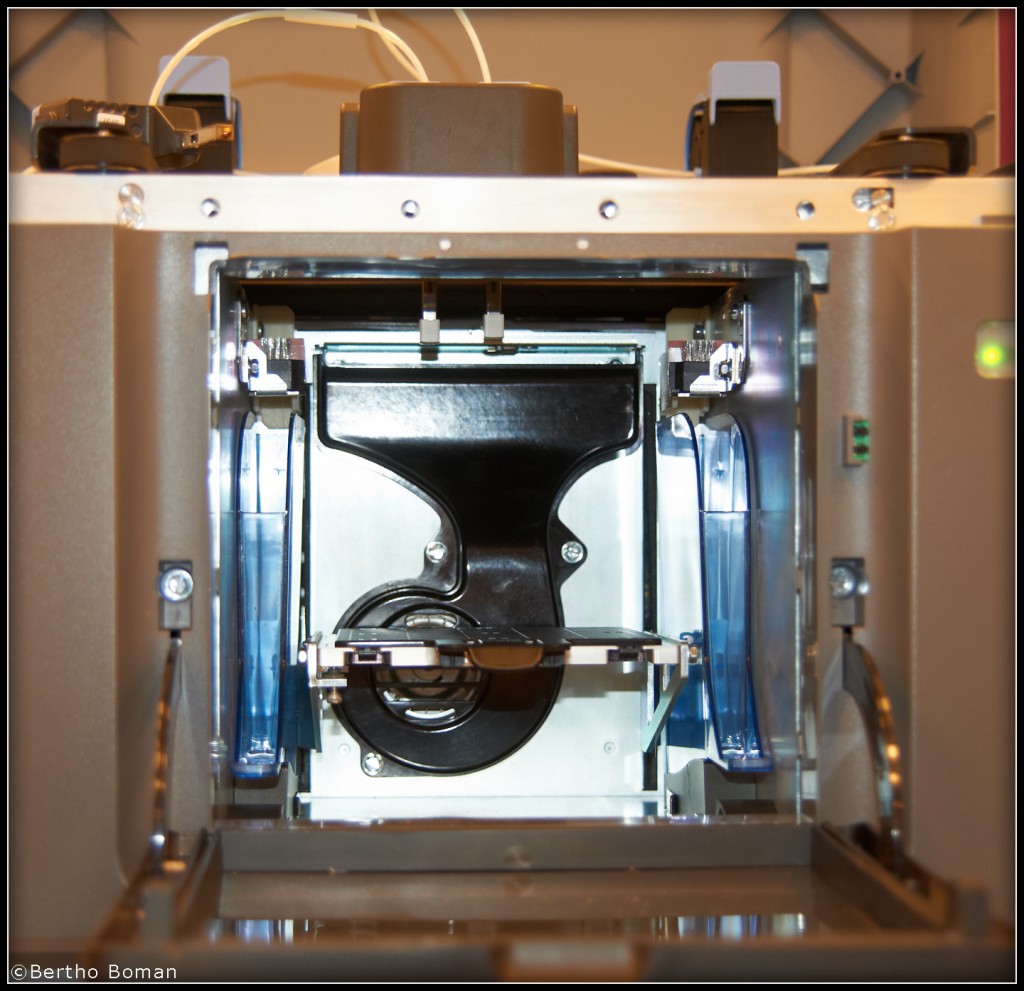 The inside of the machine can be seen in the above picture.  It has a heated build chamber.  Note the big blower in the back with a wide horizontal slot near the top.  The two white rectangular objects in the top center are the print head tips.  They have what appears to be a silicone rubber cover. 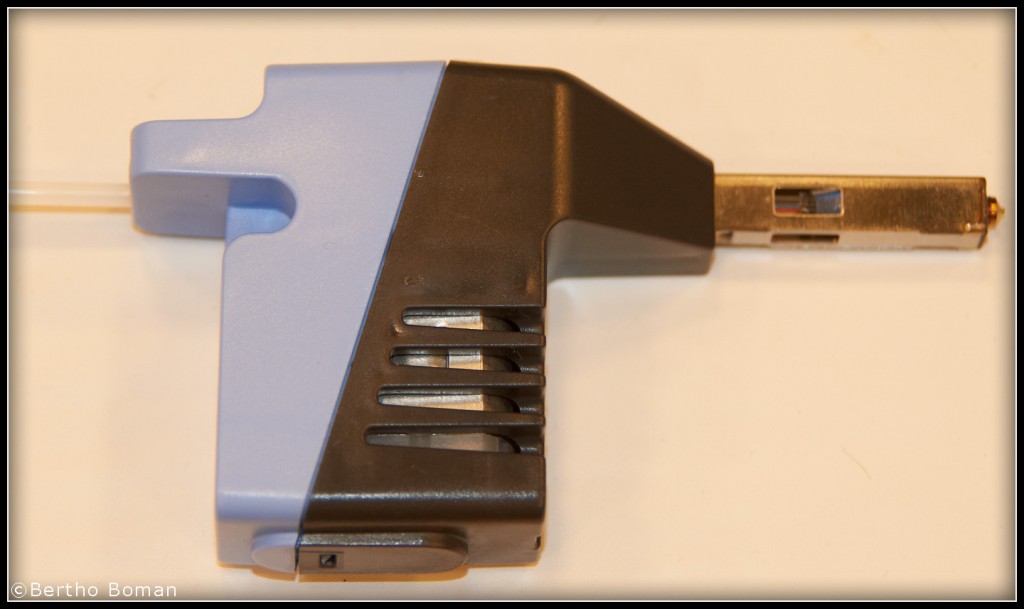 The most intriguing part to me is the head design.  It is extremely small!!  Besides the thermal heater function it also has the drive circuit inside that small case.  I managed to get an opportunity to look inside it.  It is very nicely made, considering it is a throw away item.

Sorry, no inside pictures of the head, I did not want to be too obvious…….  The last picture is the outside view of the spare head.

UP!3D & Afina Printers
There were two near identical printers and both machines worked very well at the show:
“UP!3D”  http://www.up3dusa.com/
“Afina”    http://www.afinia.com/

The manufacturer is a Chinese company that makes both printer and they have also opened a branch in the USA to sell it directly to end-users.  That is the Up!3D printer version.  The company makes several different models in China but this is the main model marketed in the USA except for a smaller even lower cost enclosed version.

The same printer is marketed by an old USA company that is manufacturing other hi-tech equipment.  They are importing the printer from the Chinese company and branded it “Afina”.   Since they are an established company in the USA they claim that they have a good support organization in place.

Fabbster
A new entry on the 3D printer FDM market is Fabbster from Germany.  http://www.fabbster.com/

Apparently “FDM” is trademarked by Stratasys and some companies are instead using Fused Filament Fabrication, FFF, as a generic  term although Fabbster used the FDM. 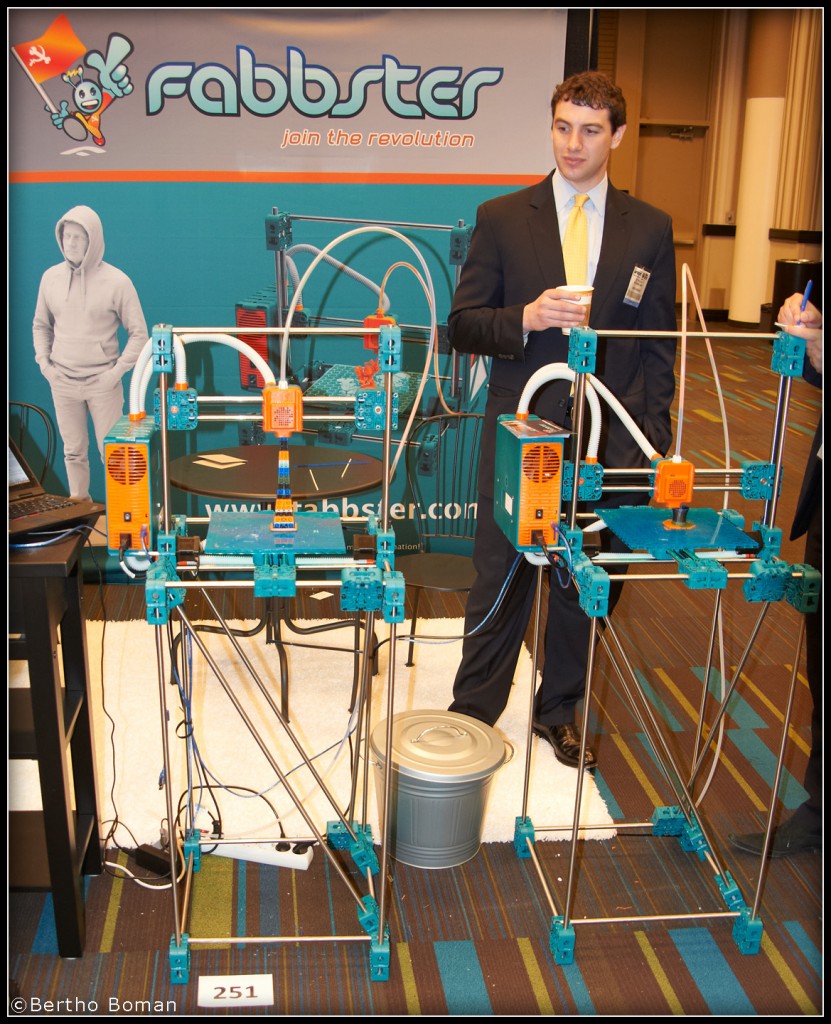 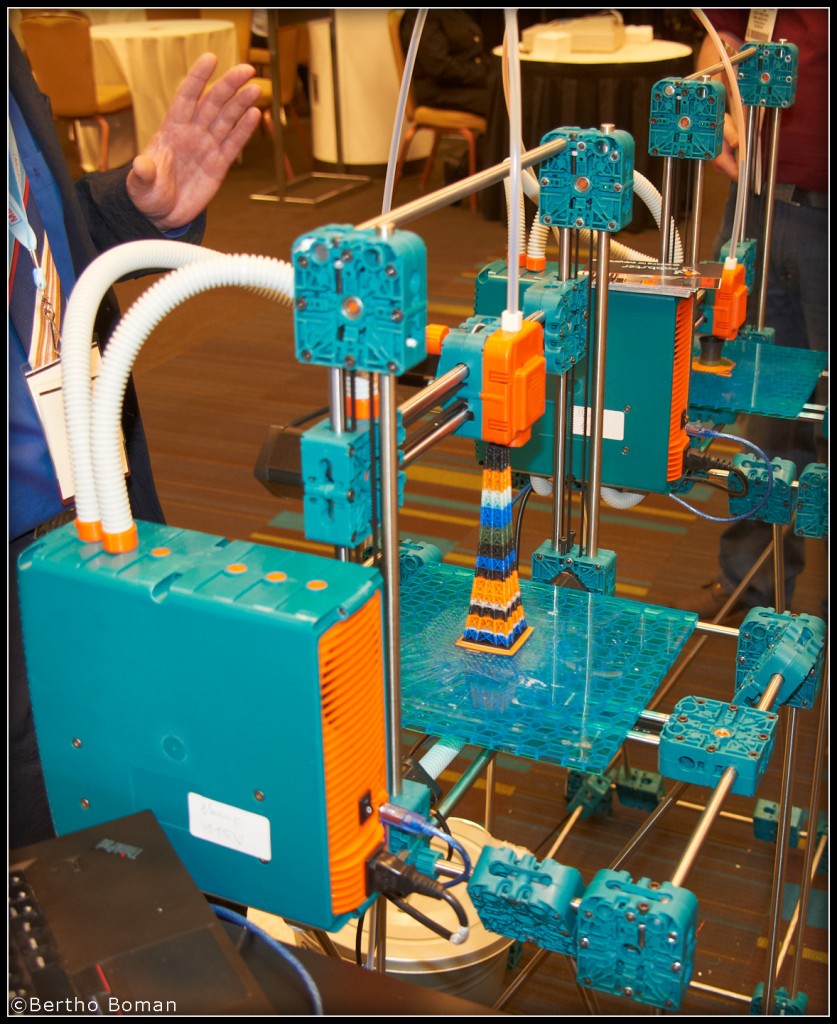 For lack of better description, and as you can see in the two pictures, it is a RepRap style printer with molded interconnection blocks.  The machine is supplied with Netfabb software. 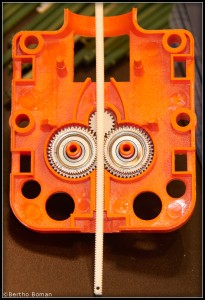 The very strange, and I think a very bad idea, is the material.  I guess they have been reading about slipping filament feeders so they produced a rectangular material with gear racks on both sides.  That is driven by opposing gears and I am sure it never will slip!   See the picture above.

Why a bad idea?

Software
Besides the various open source software available for 3-D printing there is at least one low-cost commercial one:   http://www.netfabb.com/

Netfabb makes high-end commercial software and they also sell customized low-cost ones for different hobbyist printers, for example, the Ultimaker.

One of the complaints often heard is that Netfabb is very slow releasing updates and this was discussed at length at the show with Alexander Oster.  Their main counter-argument is that it is a very long process to release new software since it has to go through careful quality control and it is also difficult to support beta versions in the field.

My suggestion was to release beta-versions with the understanding that there would be no tech-support for them, only user feedback.  Tech-support could be limited to only officially released versions.

Also a pleasant surprise, the other manager at the show, Ulf Lindhe, is from Sweden.  I am also from Sweden but live in the USA, so we got a chance to talk about international Netfabb distribution. 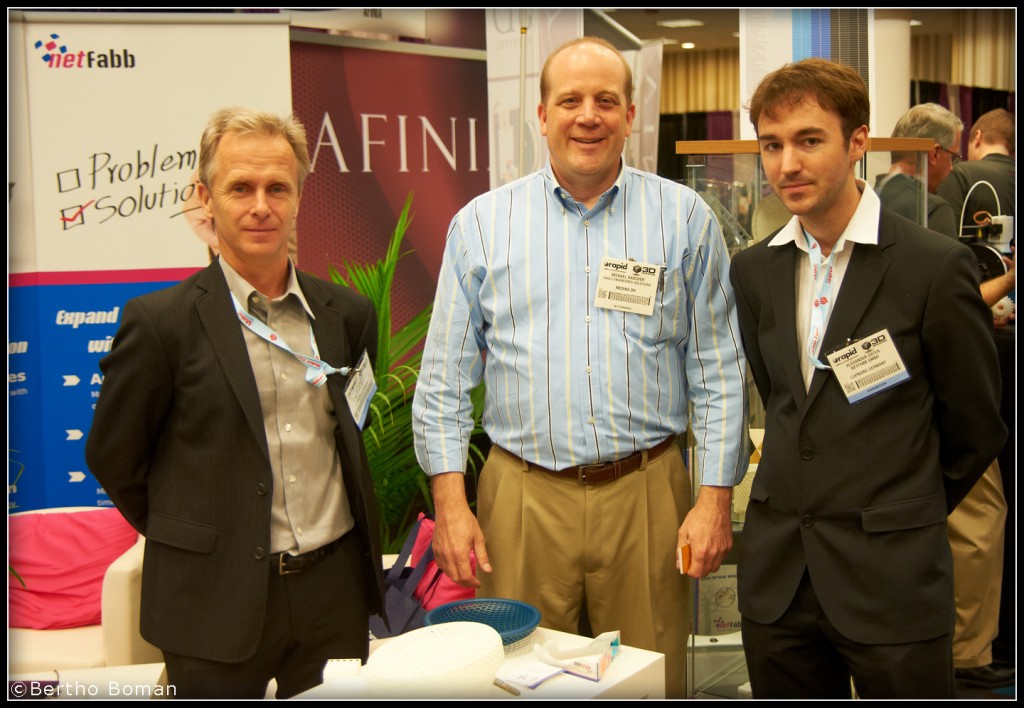 In the picture Ulf is on the left side and Alex on right and an unknown customer in the middle.